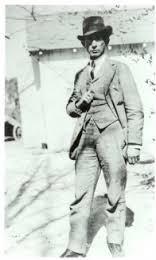 Coming to Tustin with his parents, Lysander and Emily Arvilla Utt, at the age of 8, he completed Tustin Grammar School and worked at an assortment of jobs until his father died, leaving him in charge of the L. Utt Pioneer Store in 1891. He managed the store for about two years before selling it and ending his merchandising career.

In 1896 he bought the floundering Water Works from the Willard Brothers and eventually turned it into a successful operation, which he renamed Tustin Water Works. Although his stepson Walter Rawlings eventually took over the management, Utt remained part of the operation. The City of Tustin purchased the water works in 1982.

A great believer in education, Utt served on the Tustin Grammar School District Board and played a prominent role in the organization of the Tustin Union High School District. C.E. Utt Middle School recognizes his contributions to education.

Utt began his agricultural career with Sherman Stevens in 1906 and soon became known as one of Orange County's most progressive agriculturists. The two leased 1,000 acres from James Irvine and organized the San Joaquin Fruit Co. After they planted Valencia oranges, lemons, and walnuts on the property, Utt introduced the practice of growing beans, peanuts and chilies between the rows until the trees came into production. Around 1914 Utt planted a vineyard on Lemon Heights where he had built a home. The abundance of grapes produced on this acreage led him to another business adventure, The Utt Juice Co. After bottling grape juice on his back porch for several years, giving it away to family and friends, Utt expanded the operation and moved into a building which he owned at the corner of Prospect and Main. Archie Schellhous, who soon joined him as a partner in establishing the Queen Isabella brand of juice, jams and jellies, took over the business in 1931. Utt was one of the first to plant peanuts and chilies as crops in the Tustin area. Soon he was producing many sacks of peanuts for the market and became known as the "Peanut King." He also gained recognition by inventing a chili dry house to replace the method of curing peppers by laying them in the sun to dry. Although not as picturesque as the colorful strings of red peppers reflecting the sunlight, the drying shed was much more efficient.

Eventually the San Joaquin Fruit Co. used their experience gained on the Irvine Ranch to develop property in Ventura County. Utt formed the Utt Development Co. in Oxnard and developed ranches in the Simi Valley and Point Magu areas. It was said that Utt, who died in 1951, had grown every major crop possible in Orange County with the exception of sugar beets.